Beneficial Bacteria (and not so beneficial) for Cannabis

Encourage Beneficial Micro-Organisms in your Garden Pretty much every single time of soil has some sort of fungi in it, which can either be beneficial or very bad for plants. These fungi work by connecting to your plants’ roots, and the fungi essentially enters into a symbiotic relationship with your plant. This is an incredibly potent way to protect and feed your plants, and this type of relationship essentially makes most life possible on the planet. Microscopic life is powerful enough to eradicate the entire planet, after all.

Types of Fungi and Beneficial Bacteria for Cannabis

We’re going to have a look at various different type of fungi and beneficial bacteria used when it comes to growing cannabis and the differences between them; there are thousands of different types of fungi and bacteria, all of which have their own functions.

Ectomycorrhizal Fungi are types of fungi that don’t actually get inside the colonized roots; they stay on the outside of the root system and can be seen without the use of a microscope. If you were to wash out a root system with this type of fungus attached to it, you’d be able to see small dots stuck to the roots.

Bacteria are microscopic beings that essentially decompose minerals so that your plants’ roots can easily absorb them, as well as attracting atmospheric nutrients to the soil. On the other hand, they also produce a certain amount of stimuli for plant roots, as well as protecting them and the plant itself from various different insects and microorganisms, including damaging nematodes.

When growing cannabis, as well as knowing which fungi and bacteria are beneficial for cannabis, you’ll also need to be familiar with fungi and bacteria that harm your cannabis plants in order to stop this from happening. Cannabis plants are always vulnerable to fungi or bacteria infestations, which is why it’s a great idea to use preventive products. See our “It’s Alive” Dr. Frankenstein’s – bio-animation spray. Bio-stimulant/Fungicide/Insecticide/Surfactant for treating damaging Fungi (MOLDS) The different types of fungi that can severely damage cannabis plants, especially their roots, are pretty well-known nowadays, and we have a whole post regarding what they are and how to prevent them – click here to read it. We’re going to have a closer look at the various types of damaging bacteria that can infect your plants; thanks to the genetic makeup of cannabis and the wide amount of preventive and combative products that are on the market, bacterial infections are pretty easy to deal with in cannabis plants.

We’re only going to name a few bacteria, as these all englobe hundreds and thousands of sub-species of bacteria.

How Bacteria can Damage Your Plants

The first thing to keep in mind is that you can’t see bacteria with the naked eye, so you won’t even know that your plants are infected until they begin to show symptoms – bacteria can be found in the air, in water, even on your skin. When it comes to how bacteria shows up on plants, it can cause issues such as staining, rotting, bad smells or even weird growths on the trunk. We’re going to name a few of some of the most common symptoms. Mycoplant is a product that contains some of the best mycorrhizae fungi that have been used for years in classic cannabis growing as well as conventional crops. It contains high amounts of Glomus Intarradices, which is one of the most used fungi types in organic growing. This type of fungus essentially attaches to your plants’ roots and begins working in symbiosis with them, sharing food and allowing your plants’ roots to absorb more nutrients and improving their general strength. When used, you’re guaranteed larger yields and high quality flowers – plus, it makes growing plants much easier. It’s generally used at the start of the growing process and after every transplant, although you can also use it on seeds before germinating or on clones for rooting.  It can also be used to protect your plants from fungi and bacteria, used via watering or spraying. Piranha by Advanced Nutrients is a mixed product that contains various different types of fungi and bacteria that create the absolute perfect environment for your plants’ roots, allowing them to grow incredibly fast while also keeping them protected from any sort of damaging fungi. This product comes in liquid format, allowing you to easily use it in hydroponic grows too. In order to get the absolute best results from Piranha, we recommend using it alongside Tarantula and Voodoo, which were designed to be used together and generate an incredibly massive root system in cannabis plants. Piranha should be used during the first couple of weeks of the bloom period for the best possible results. Kraken is quite a particular product that contains one type of fungi that was discovered not that long ago (Glomus Iranicum var. Tenuihypharium), capable of developing in arid soil with high pH content. This clearly indicates that this fungus is resistant to many issues and has a high survivability rate; you can use this product in extreme growing conditions and still get amazing results. When used on cannabis planta, they’ll begin throwing amazingly large and thick roots – your plants will begin to need more water and nutrients to keep growing. Kraken can be used during the vegetative and bloom periods, and we highly recommend doing it after transplant. Voodoo is a product created by Advanced Nutrients. What this product does is essentially help your plants’ roots to absorb a lot more nutrients, meaning that you’ll need to increase your plants’ nutrient feeding schedule by quite a lot. This is thanks to the amazing amount of bacteria and micro-organisms it contains. You can also use Voodoo to correct any excess nutrients or blockages in your substrate, as its bacteria can help to decompose these materials in no time. This liquid product is incredibly easy to use, and just like Piranha, you’ll need to use it alongside Tarantula and Piranha for the best results, using them during the first two weeks of both the vegetative and bloom period. Bactohemp might be one of the most-used bacteria-rich products when it comes to homegrowers thanks to its affordability, format, results, and because of how easy it is to use. It’s partly composed by Ascophyllum Nodosum algae, allowing your plants to go a beautiful, vibrant green color. Bactohemp is designed with bacteria that stimulate vegetative and root growth – during the bloom and for autoflowering strains, you’ll need to use Bactobloom and Bactomatik. The best way to use Bactohemp is to use it once during the growth period and then another few days after transplanting – you’ll notice a massive change almost instantly. This might be one of the best products on the cannabis market when it comes to root growth; with just a couple of doses, your plants’ will be producing some enormously large roots. This is due to the extreme amount of work put into combining the right amount of bacteria that’s capable of treating cannabis plants in just the right way. For the best possible results from Mammoth P, we highly recommend using Mammoth P during the vegetative period and the first few weeks of bloom – keep in mind that your plants will need more nutrients and water than usual in order to keep up with the bacteria and the massive roots they’re causing. Last, and definitely not least, we have Great White! This is one of the most complete, efficient bacteria products on the market, as it combines the perfect amount of fungi and microoganisms, helping you to improve the health of your plants while also protecting their roots from harmful elements. It also makes it possible for your plants’ roots to begin absorbing all of the nutrients given to them, making it extremely hard to over-feed or block your roots. This product contains over 30 different types of fungi and beneficial bacteria. For the best results, we recommend using this product after every transplant; after the initial use, you can us 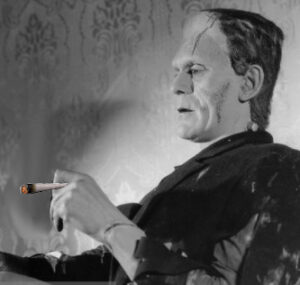 HANGOUT with us in the DUNGEON, a COOL Place to share thoughts, learn new things and show your best stuff

Join us and friends, newcomers and guests in the Dungeon…A Virtual Reefer Bar where we can discuss almost anything. Please do not post offensive or distasteful content